When IoT viability transcends supply chain efficiency and effectiveness, follow up action is paramount to transition into a new normal. But before going there, like Elon Musk’s hyperloop of people that looks like something straight out of a comic book on Mars, is the hyperloop of things really as viable as it seems, i.e., effective as well as efficient?

Let’s take a look at the Picnic’s new HOTPOD!

Picnec, an App-Only grocery startup from the Netherlands, is touting a new last-mile delivery technology that hyperloops everything through tubes entirely devoid of matter, in pods called HOTPOD. It can deliver purchased grocery within minutes without uberized delivery hailing. Like anything properly designed to function in the new IoT normal, all you need to do is download the App to have purchased items delivered at fixed schedules of their chioce throughout the day.

No physical storefront, so what is the sales channel then?

Picnic is what we call a strictly speaking online supermarket. That means it cannot be reached anywhere other than the App. If you don’t use a smart phone or PC, don’t hold your breath. If you do, however, the new application is a peace of mind that saves you from peak hour check out lines that impairs even the hyper-uberized gig economy to free up several more hours if not days a month for a piece of that personal relationship everyone talks about, i.e., family or people that matter the most to us, for yourself. A win-win!

Not long after commencing service, Picnic became the leader of delivery efficiency. Starting from one neighborhood and expanding one city at a time, it now serves interconnected grocery networks that encompass many large cities. The delivery route to be used and delivery schedule is planned according to each customer’s distance to ensure efficiency beforehand. Customers, on the other hand, are able to select the date and time according to available delivery time slots. The result of planned efficiency is customers that are satisfied enough with agreed schedules to overlook the gaps between each HOTPOD.

As groceries are typically fairly heavy and not very expensive, the shipping fee represents a huge cost percentage piled on to the total bill. Turning the achilles heel to grocery delivery into a key success factor in swinging the customer’s purchase decision, free shipping strategies have been deployed as an immensely popular marketing technique for new retailers in the Netherlands to introduce their products to the customers, and get them accustomed if not expect free delivery to come as standard, altogether. A capacity that legacy competitors can’t match!

While many insist a shipping fee is necessary, Picnic stands firm in it’s free resolve as it has figured out how to do so, effectively. It uses a compact jumbo electric pickup truck (e-truck!) capable of uploads from distribution centers and accessing small and large alleys to deliver to the doorsteps with significantly lower costs, mainly from otherwise massive brick-and-mortar storefronts that cost conventional mall chains an arm and a leg, as well as the massive brick-and-mortar fuel requirement that cost the earth. Thus, the relatively low price and free shipping standard. 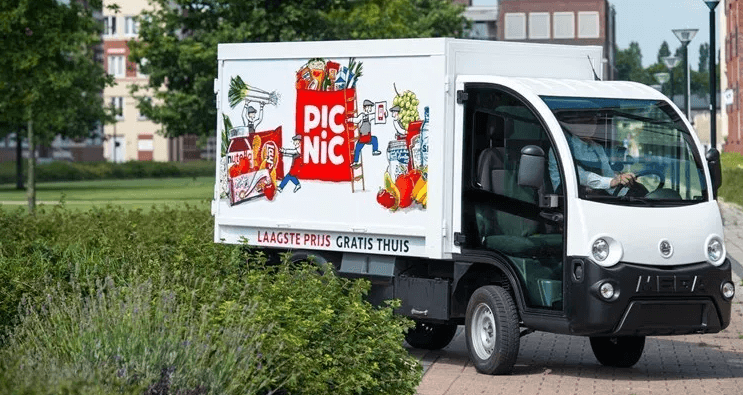 Picnic has announced in The Picnic Blog Today, after 3 years of system development secrecy, that by 2022, 15% of online grocery orders within the country will be delivered within minutes. The system will consist of pods that are specifically designed to optimize speed and contain product crates while shooting through underground pipes, or vacuum tubes, that interconnect networks of Picnic distribution centers and customer households that sign up for the program.

The initial test starts with a group of 20 households in a new development area to be called Gouda after the flat round cheese with a yellow rind that originated in the town of Gouda, Netherlands. Vacuum tubes are installed along with other underground infrastructure such as water pipes, wires or drains. The reason behind the limited testing area in Gouda makes a lot of sense as dismantling and installing new pipe systems will be too costly in established residential areas with unsupportive infrastructure. Picnic will test the Hyperloop system in Gouda for 4 weeks. Should satisfactory results suggest success, the next step will see the system extended to Diemen, a city nearby Amsterdam.

The final obstacle or another opportunity?

In addition to online competitors in the Netherlands like REWE, Amazon and Bringmetster, Picnic can also encounter disruptive innovation from the global App king, Google, who developed the self-driving bicycle in partnership with a leading bike brands like VanMoof.

The dutch prefer cycling as the common mode of transport, 36% of daily commuters registered as the most used on any given day, over POVs (personally owned vehicles) and public transit. Cyclists thus represent a daily necessity, as opposed to a lucrative recreational activity, performed by a large enough majority of operators that could by empowered by an uberized application as a clean delivery option in areas where land and infrastructure proves too cost-ineffective for the HOTPOD system. In the process, cyclists thereby become Prosumers, or consumers that take part cooperatively in the production and supply chain process of the product they consumer themselves, by means of a collaborative plateform known to many as the internet of things to form zero marginal cost societies.
Compiled by: BLOG.SCGLogistics